C.S. Lewis responds to this sort of criticism in the context of the Gospels:

Now, as a literary historian, I am perfectly convinced that whatever else the Gospels are they are not legends. I have read a great deal of legend and I am quite clear that they are not the same sort of thing. They are not artistic enough to be legends. From an imaginative point of view they are clumsy, they don’t work up to things properly. (“What Are We to Make of Jesus Christ?” 1950)

I don’t know all that Lewis might have intended when he said “they don’t work up to things properly.” He does go on to mention that the Gospels leave out most of Yeshua’s biography, or what would have been his biography had anyone written it out. The same shortcoming can be observed in this week’s haftarah passage, which tells the story of the birth and early years of Samson. The story begins well enough—and in good legendary fashion—with an angelic visitation. He announces that the barren wife of Manoah will conceive and bear a son, who will be “a Nazirite to God from the womb,” thus connecting this reading with our Torah portion, Numbers 4:21–7:89, which details the Nazirite vow. From there, however, the story doesn’t “work up to things properly,” but leaps ahead:

And the woman [whose name we never learn] bore a son and called his name Samson. And the young man grew, and the Lord blessed him. And the Spirit of the Lord began to stir him in Mahaneh-dan, between Zorah and Eshtaol. Judges 13:24–25

The child is born, gets named, grows, is blessed, and then—boom!—the Spirit “began to stir him.” Interesting phrase. This stirring happens in a specific geographical setting, but it still sounds a bit vague, and it’s hardly the sort of dramatic supernatural encounter you might expect in a good legend.

Things get worse for the debunkers in the next chapter. Apparently Samson responds to the Spirit’s stirrings by going down to Timnah and falling for a Philistine woman. Then our noble hero tells his parents, “I saw one of the daughters of the Philistines at Timnah. Now get her for me as my wife” (Jud 14:2). His parents ask Samson why he can’t find a nice Jewish girl, because they don’t “know that it was from the Lord, for he was seeking an opportunity against the Philistines. At that time the Philistines ruled over Israel” (Jud 14:4).

Samson’s story takes up four full chapters (13–16) right in the middle of the Book of Judges and is its iconic tale. The people are in bondage and oppression because of their sins, eventually God has mercy on them and raises up some flawed and deficient individual to rescue them, and there’s a period of peace until the cycle starts up again. Accordingly, Samson’s story opened: “And the people of Israel again did what was evil in the sight of the Lord, so the Lord gave them into the hand of the Philistines for forty years” (Jud 13:1). But why do I consider Samson one of the “flawed and deficient” heroes of Judges? We’ve already noted his infatuation for a Philistine woman. Soon after he marries her he ditches her, and this launches a series of adventures in which Samson out-bullies the Philistines, displays lots of brawn (and little brain), celebrates by visiting a prostitute in Gaza, and uses a lot more brawn to get out of the jam he creates for himself (16:1–3). OK, God uses Samson to subdue the Philistines, but Samson hardly emerges as a hero of legend; he looks more like the real-life bullies and bigshots of today or any day.

The denouement comes after Samson falls for—you guessed it—another Philistine woman, the infamous Delilah. The text doesn’t say she’s a Philistine, but she’s from Sorek, which borders on Philistines territory, and as soon as she gets involved with Samson the lords of the Philistines show up to enlist her to betray him. She cooperates without an argument. You know the story: She gets Samson to tell her that his great strength depends on his long hair, which has never been cut. Eventually Delilah manages to cut off his hair, so the Philistines can take him captive, put out his eyes, bind him in shackles of bronze, and set him to turning a millstone grinding grain. Eventually Samson’s strength returns and he uses it to pull down the pillars of the house in which he’s imprisoned, thereby killing thousands of Philistines as well as himself. 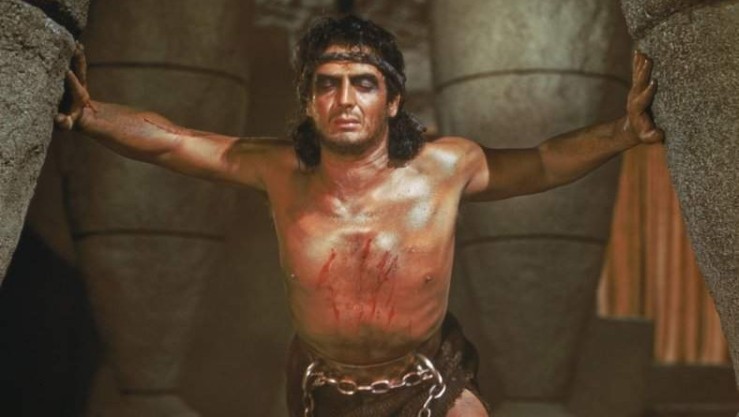 Not a fairly-tale ending, but one that reminds us of the frailties of all human heroes, and of God’s ability to advance his program despite them. While folks are trying to debunk the Bible, the Bible is debunking hero-worship with laser precision.

But Samson isn’t all bad; he’s included in the Hebrews 11 Hall of Fame:

Time would fail me to tell of Gideon, Barak, Samson, Jephthah, of David and Samuel and the prophets—who through faith conquered kingdoms, enforced justice, obtained promises, stopped the mouths of lions, quenched the power of fire, escaped the edge of the sword, were made strong out of weakness, became mighty in war, put foreign armies to flight. . . . Others suffered mocking and flogging, and even chains and imprisonment. They were stoned, they were sawn in two, they were killed with the sword. They went about in skins of sheep and goats, destitute, afflicted, mistreated—of whom the world was not worthy. Heb 11:32–38

Hebrews includes Samson in the list of the faithful, but where is he in the description of faithful deeds that follows? I believe he’s described in the words “made strong out of weakness”—which sets him off from the heroes of legend. Yes, Samson’s early strength and mighty deeds were legendary, but it’s his later strength, which came out of weakness, that gains him a place among the faithful. Perhaps he could only find this strength after he became weak, blind, and humiliated by his enemies: “O Lord God, please remember me and please strengthen me only this once, O God, that I may be avenged on the Philistines for my two eyes” (Jud 16:28).

Legends are inspiring, but the real-life tale of a strong man made weak by his own lust and impulsiveness, who finally learns to call upon God for strength, has stayed with us for millennia. Our take-away isn’t revenge on the long-gone Philistines, but the divine empowerment that eludes us when we depend on our own power. As the Lord tells Rav Shaul: “My grace is sufficient for you, for my power is made perfect in weakness” (2 Cor 12:9).